Is Wicked Worth It?

This month I went to see Wicked at the Apollo Victoria Theatre in London with my friends. VocalEyes, provided the audio description and touch tour. Today's post is my thoughts on the show and tour.

VocalEyes is an organisation that provides accessible tours of open houses, museum exhibits, and theatre shows. The tours involve live audio description, where everything is described to you. For theatre shows touch tours are also included, which involves blind and partially sighted people getting a chance to see the props and costumes used in the show. It's called a "touch tour" because you get to feel all the details used to create the props and costumes the cast use. When I went to see Phantom of the Opera and Mary Poppins, the touch tour took place backstage and on the stage itself, where we walked around and experienced everything first-hand. Wicked is the first show I've seen where this isn't the case. Usually, these shows don't allow you to take pictures, but luckily the Wicked team did! Below are some of the items I got to see.

IMAGE DESCRIPTION: Photo of Elphaba's floor length and long sleeve dress placed on a maniquin that we got to feel. It's black and made up of different fabrics like velvet and feathers. In the emerald lighting it looks dark green.

IMAGE DESCRIPTION: Photo of the baby Elphaba prop that I'm holding in my arms. It's a bright green colour, like slime. The texture feels like rubber and is heavy

IMAGE DESCRIPTION: Photo of the bouquet of red and orange flowers and the tactile shiny silver mirror we got to feel, placed on the velvet green table cloth. At the top you can see the brown strap of a bag

When I arrived at the theatre, I found that the hallway had emerald green lighting (,like the emerald city in the show). So, the room was quite dark and I couldn't see very well. The touch tour took place in this hallway. There was one awkward moment where I was touching the Wicked merch display items, that weren't part of the tour! Thankfully, I was able to use my phone camera and clearly see what I was touching. We walked around, felt things with our hands whilst the Wicked team explained what the item was and its significance in the show. Character props were placed on tables covered in velvet table cloths. Costumes were placed on chairs, with the exception of Elphaba's dress that was on a mannequin. It was great feeling the amount of detail in the costumes. Plus, what it was like for the actors to use these props.

At the show you listen to the audio description via a headset. There are some theatres that allow you to use the Sennheiser mobile connect app to listen to the audio description on your phone, with your own headphones. Apollo Victoria is one of them. However, the team recommended we used the headset. A member of staff guided us to our seat and gave each of us a headset. We were told to get audio description, the headset needed to be on number 6. The number was written on a small screen in black on a grey background and there was a dial we needed to turn. The staff helped us adjust the headsets for us. Also, during the intermission, they came to our seats and asked if we needed anything. I managed to buy some crisps from them, I gave them my card to pay and had it brought to my seat. 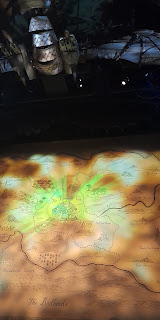 IMAGE DESCRIPTION: Photo of the stage before the show started, which had a map of Oz as the background

During the show, we heard a live narrator described what was happening on the stage on the headsets. For example, during "Defying Gravity", the narrator expressed the intensity of the scene when Elphaba freed the flying monkeys and escaped on her broomstick. Without it, I wouldn't have known what the characters were doing during the songs and how it connected to each scene. Wicked had brilliant songs! The cast were amazing, with their dancing and performances. After each song the crowd cheered and applauded. I loved it! The show atmosphere was really immersive, there was one scene where smoke from the stage came to our seats. So, it felt like we were experiencing the scenes like the characters themselves. It was great to see how the story connected to Wizard of Oz, we got to see why the flying house and Dorothy's shoes were so important to the Wicked Witch of the West. Also, with my magnified monocular, I could see details like when Glinda was coming down on her bubble, there were small bubbles floating around the big sphere she was standing in. Not to mention, how the props I felt (,such as the flowers) were utilised in the story!

My friends and I are all visually impaired, I was one of the few people with the most useful vision in our group. After the touch tour, we were told we needed to leave the theatre and come back for the show. Luckily, the staff were very helpful, they used sighted guide and took us to Costa at the station. They even gave us instructions on how to get back for the show. At Costa a staff member told us what was on the menu, helped us pay and took us to our table. She also brought the food to us too. When we got back to the theatre it was very busy. So, o, I guided my friends to the front desk, showed the staff member our tickets. He called another staff member over, who took us to the disabled person toilets, to our seats, got us snacks and explained how to get back to the station ourselves after the show.

All in all, my friends and I had an excellent time at Wicked. I definitely recommend going to the touch tour and seeing it with audio description. The staff at Apollo Victoria are very accommodating and very helpful. I can see why Wicked is a show people see multiple times.  That's all I've got for this post, let me know if you plan to see Wicked anytime soon.